Want to keep a log of the climate in your greenhouse, build a humidor control system, or track temperature and humidity data for a weather station project? AOSONG’s DHT11 or DHT22 Temperature and Humidity Sensor could be the perfect fit for you!

These sensors are factory-calibrated and do not require any external components to function. With just a few connections and a bit of Arduino code, you can begin measuring relative humidity and temperature right away.

They provide temperature and humidity readings accurate to within one decimal place, which is a plus. The only drawback is that they only provide new data every second or two, but for the price and performance, it’s hard to complain.

The DHT11 and the DHT22 are the two most widely used sensors in the DHTxx series. They look kind of the same and have the same pinout, but their specs are different.

Despite these differences, the operating voltage of both sensors ranges from 3 to 5 volts, with a maximum current of 2.5mA (during conversion). The best part is that DHT11 and DHT22 sensors are swappable, which means that if you build your project with one, you can simply unplug it and replace it with another. Your code may need to be tweaked slightly, but the wiring remains the same!

Inside the DHT Sensor

If you remove the sensor’s casing, you will find an NTC thermistor and a humidity sensing component inside.

The humidity sensing component has two electrodes with a moisture-holding substrate (usually a salt or conductive plastic polymer) in between. As the humidity rises, the substrate absorbs water vapor, resulting in the release of ions and a decrease in the resistance between the two electrodes. This change in resistance is proportional to the humidity, which can be measured to estimate relative humidity.

Technically, all resistors are thermistors in the sense that their resistance changes slightly with temperature, but the change is typically very small and difficult to measure.

Thermistors are designed so that their resistance changes dramatically with temperature (by 100 ohms or more per degree). The term “NTC” stands for “Negative Temperature Coefficient,” which means that resistance decreases as temperature rises.

The DHT11 and DHT22 sensors are both relatively simple to connect. They have four pins:

Data pin is used for communication between the sensor and the microcontroller.

Wiring DHT11 and DHT22 Sensors to an Arduino

Now it’s time to connect the sensor to the Arduino!

Connecting DHT sensors to Arduino is straightforward. They have fairly long 0.1′′-pitch pins, allowing them to be easily plugged into any breadboard. Connect the VCC pin to the Arduino’s 5V and the GND pin to ground. Finally, connect the Data pin to digital pin #8.

You’re now ready to upload some code and get it working.

The DHTxx sensors have their own proprietary single-wire data transfer protocol. This protocol requires precise timing. We don’t have to worry too much about this, though, because we’ll be using the DHTlib library, which handles almost everything.

Filter your search by entering ‘dhtlib’.There should only be a single entry. Click on that and then choose Install.

After installing the library, copy and paste this sketch into the Arduino IDE. The following test sketch will print the temperature and relative humidity values to the serial monitor. Try out the sketch, and then we’ll go over it in more detail.

After uploading the sketch, you should see the following output on the serial monitor.

The sketch begins by including the DHT library. Following that, we specify the Arduino pin number to which our sensor’s Data pin is connected and create a DHT object.

In the setup, we initialize the serial communication.

In the loop, we use the read22(dataPin) function to read the DHT22. This function takes as a parameter the sensor’s Data pin number. When working with DHT11, you must use the read11() function; to do so, you just need to uncomment the second line.

We can now retrieve the humidity and temperature values by accessing the DHT object’s properties using dot . notation.

The DHT object returns the temperature in degrees Celsius (°C). It is easy to convert to Fahrenheit (°F) using the following formula:

If you’re constructing your own incubator or a similar project, you’ll need a 16×2 character LCD rather than a serial monitor to display the current temperature and humidity levels. So, in this example, we’ll also connect the LCD to the Arduino in addition to the DHT11 and DHT22 sensors.

If you are unfamiliar with 16×2 character LCDs, consider reading the tutorial below. 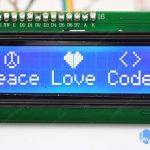 Interfacing 16×2 Character LCD Module with Arduino
Do you want your Arduino projects to display status messages or sensor readings? Then these LCD displays can be a perfect fit. They are extremely...

Following that, connect the LCD as shown below.

The sketch below will display the temperature and relative humidity values on the 16×2 character LCD. This sketch is similar to the previous one, except that the values are printed on the LCD.