Interface Sound Sensor with Arduino and Control Devices With a Clap Ready to give your next project an ear?

These sound sensors are inexpensive, simple to use, and capable of detecting voice, claps, or door knocks.

You can use them for a variety of sound-reactive projects, such as making your lights clap-activated or monitoring your pets while you’re away.

Do you know how Electret Microphones work?

Inside a microphone is a thin diaphragm and a backplate. Collectively, they function as a capacitor.

When you speak into the microphone, your voice generates sound waves that strike the diaphragm, causing it to vibrate.

When the diaphragm vibrates in response to sound, the plates move closer or farther apart, causing the capacitance to change. As a result, a voltage is generated across the plates, which we can measure to determine the amplitude of the sound.

The sound sensor is a small board that incorporates a microphone (50Hz-10kHz) and some processing circuitry to convert the sound wave into an electrical signal.

This electrical signal is fed to the on-board LM393 High Precision Comparator, which digitizes it and makes it available at the OUT pin.

The module includes a potentiometer for adjusting the sensitivity of the OUT signal.

You can use it to set a threshold, so that when the amplitude of the sound exceeds the threshold, the module outputs LOW, otherwise HIGH.

This setup is very useful for triggering an action when a certain threshold is reached. For example, when the amplitude of the sound exceeds a threshold (a knock is detected), you can activate a relay to control the light.

The sound sensor only has three pins:

VCC supplies power to the sensor. It is recommended that the sensor be powered from 3.3V to 5V.

OUT pin outputs HIGH under quiet conditions and LOW when sound is detected. You can connect it to any digital pin on an Arduino or to a 5V relay directly.

Wiring a Sound Sensor to an Arduino

Let’s hook the sound sensor to the Arduino.

Connections are fairly simple. Start by connecting the module’s VCC pin to the Arduino’s 5V pin and the GND pin to ground.

Finally, connect the OUT pin to Arduino digital pin #8. That’s it!

The module has a built-in potentiometer for setting the sound level threshold above which the module outputs LOW and the status LED lights up.

Now, to set the threshold, click your finger close to the microphone and adjust the potentiometer until the module’s Status LED blinks in response to your clicks.

The following simple example detects claps or snaps and displays a message on the serial monitor. Go ahead and try out the sketch; we’ll go over it in detail later.

If everything is working properly, you should see the following output on the serial monitor when the clap is detected.

The sketch starts by declaring the Arduino pin to which the sensor’s OUT pin is connected.

Next, we define a variable called lastEvent that stores the time when a clap was previously detected. It will help us reduce accidental sound detection.

In the Setup section, we configure the sensor’s OUT pin to behave as an input and establish serial communication.

In the loop section, we first read the sensor output.

When the sensor detects a sound loud enough to exceed the threshold value, the output goes LOW. However, we must ensure that the sound is caused by clapping and not by background noise. Therefore, we wait 25 milliseconds after the output goes low. If the output remains LOW for more than 25 milliseconds, the message “Clap detected” is printed on the serial monitor.

Example 2 – Controlling Devices With a Clap

For our next project, we will use the sound sensor to create a “Clapper” that activates AC-powered devices with a handclap.

This project controls AC-powered devices using One Channel Relay Module. If you are unfamiliar with the relay module, consider reading the tutorial below. 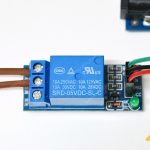 Interface One Channel Relay Module with Arduino
In your upcoming project, you might want to use your Arduino to control a high-voltage device, like a lamp, fan, or other household appliance. However,...

The wiring for this project is straightforward.

Let’s begin by providing power to the sensor and relay module. Connect their VCC pins to the Arduino’s 5V pin and GND to ground.

You’ll also need to connect the relay module to the AC-powered device you are attempting to control. You’ll need to cut your live alternating current line and connect one end of the cut wire (coming from the wall) to COM and the other to NO.

The wiring is shown in the diagram below.

Here’s the code for controlling devices with a clap.

When you’re done, the sensor should turn the device on or off every time you clap.

If you compare this sketch to our previous one, you’ll notice many similarities, with a few differences.

At the start, we declare the Arduino pin to which the relay’s control pin (IN) is connected. In addition, we have defined a new variable relayState to keep track of the relay’s status.

In the Setup, we configure the relayPin as an output.

When we detect the sound of the clap, instead of printing the message on the serial monitor, we simply toggle the state of the relay.

If the Sound Sensor is misbehaving, try the steps below.